The help page provides various help, advice, and interpretation of the various inputs and outputs on the GenePlexus webserver.

The user can supply a list of genes by either uploading a file of genes or manually entering the genes in a text box. In both cases, each gene needs to be on a new line.

The following types of gene IDs are allowed as inputs:

The genes supplied by the user will be converted to Entrez gene identifiers using gene ID mappings obtained from 60,000 locally downloaded human gene files from mygene.info.

After uploading/entering the genes, users can validate their input list by clicking the Validate button. This will pop up two tables:

The user can choose between four human genome-scale molecular networks. For each network, the nodes are mapped into Entrez gene IDs. For the GIANT-TN network, the original network was additionally filtered to remove edges with scores below the prior probability (0.01).

When a network is to be used in a supervised machine learning model, the network connections can be represented as features in one of three ways:

In the supervised machine learning model, any gene from the user-supplied gene list that is able to be converted to an Entrez ID and is also in the network is considered part of the positive class. The user can then choose if they want to define genes in the negative class based on one of two geneset collections, Gene Ontology Biological Processes or DisGeNet, based on whether the input genes represent a cellular process/pathway or a disease.

GenePlexus then automatically selects the genes in the negative class by:

The best way to determine if the chosen job options worked well is to look at the cross-validation score at the top of the results page. It could be useful to compare the cross validation score for a few different combinations of job options to help the user find the optimal set of options. Additionally, the figure below shows a summary of results generated from our recent work benchmarking GenePlexus and could help a user pick the best job parameters.

This figure displays results from the paper Supervised learning is an accurate method for network-based gene classification where the parameters are options in the GenePlexus webserver. The left panel is for models trained for Gene Ontology biological prcoesses and the right panel is for models trained for DisGeNet diseases. Each boxplot contains the results of anywhere between 89 and 160 models. Each model was trained using the study-bias holdout method, where for each geneset in a geneset collection, the most well studied genes were used to train the model and the least studied genes were used for testing. This figure can be used to help users pick the network, feature type and negative selection class that best suits their input gene list. It is worth noting that the STRING network is built in part by using Gene Ontology and DisGeNet annotations, and this circularity could be the reason for the enhanced performance of the STRING network in this evaluation.

Effect of the user-supplied gene set on model performance

The GenePlexus method has been extensively benchmarked on models that used between 10 and ~400 genes in the training set. We have found that, while there is some decrease in performance as the number of genes in the gene set increases (far left panel in the figure below), the major driving force is how “connected” the genes are in the network (center and right panel in the figure below). This is understandable as GenePlexus heavily leverages the underlying network when training the model. We have found that the GIANT-TN network shows the least decrease in performance as the gene set size increases and thus we recommend this network for use with larger gene sets like those that are generated directly from high-throughput experiments. As mentioned above, the cross-validation score is very useful in determining if a given model worked well on the user-supplied gene list. 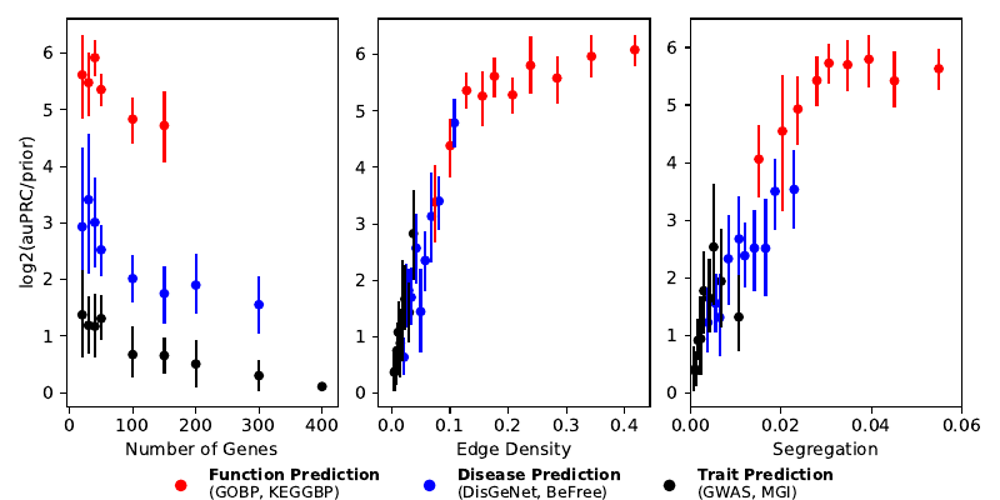 This figure shows results from the paper Supervised learning is an accurate method for network-based gene classification is an accurate method that looks into how different properties of the gene set affect the model performance. Here, the edge density is a measure of how connected a gene set is to itself in the network and segregation is how isolated the gene set is from the rest of the network. While there is decrease in performance as the number of genes is increased, the major driving force for the model is how connected the gene set is in the network. The results here are shown for the STRING network.

Information at the top

The box at the top displays the parameters of the job along with the job name. If the number of genes in the positive class is greater than 15, then the results of 3-fold cross validation performance is displayed in terms of log2(auPRC/prior). This metric reports the 2-fold change of the area under the precision-recall curve (auPRC) over the prior auPRC expected by random chance. For example, a value of 1 indicates a model that performs twice as good as the expected result.

The possible Known/Novel column values are:

The possible Training-labels column values are:

Clicking the Entrez Gene ID takes the user to a webpage containing more information on that gene.

Comparison to other pre-trained models

The tables here show how similar the custom model trained on the user-supplied gene list compares to other pre-trained models. The webserver stores the model weights from machine-learning models trained using lists of genes annotated to numerous Gene Ontology biological processes and DisGeNet diseases. The similarity score is determined by:

Clicking the Term ID takes the user to a page containing more information about that term.

The table here shows how the user input gene list was converted to Entrez IDs and if the converted Entrez IDs were in the network that was used to train the model.

The results of the GenePlexus webserver are licensed under the Creative Commons License: Attribution 4.0 International

License information for networks and genesets collections used in this work

The location of the license agreement or terms-of-use for each network or geneset collection can be found by clicking the following links. We note that no license agreement was available for GIANT, however we have obtained permission from the owner of the material to redistribute the network and they have noted that they will be adding a Creative Commons License: Attribution-NonCommercial 4.0 International to the website soon.

This website uses cookies to allow a loaded geneset to persist as the website is navigated as well as recall jobs that have been submitted. We do not use cookies for marketing, advertisement or tracking. By using our site you agree to use cookies only for the outlined purposes.